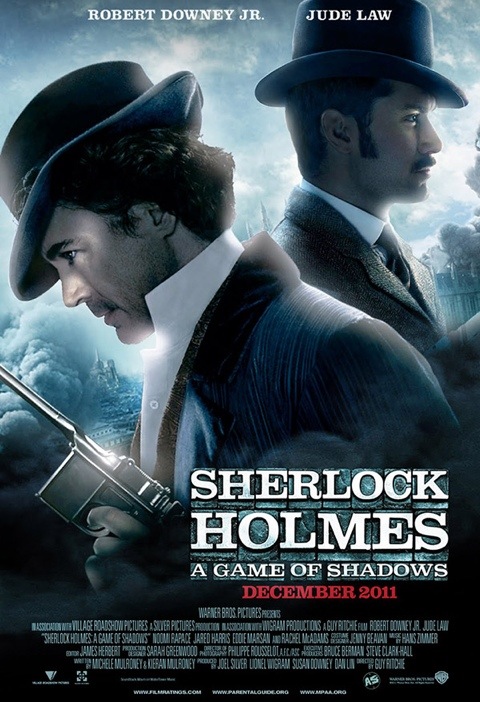 I went to see SHERLOCK HOLMES: A GAME OF SHADOWS earlier tonight. Upon hearing some of the reviews, I was expecting the film to be a complete let down. It wasn’t as bad as I thought it would be.

The story doesn’t live up to that of the original. I was never bored, but there was something the film lacked. What I can think of at the moment is that the film lacked the spark the original had. It does have a tiny tint of the dreaded sequelitis to it, but it ultimately bounces back.

The great chemistry between our two leading men, Robert Downey Jr. and Jude Law, is what stood out the most. There is no denying the chemistry that these two characters share. There is ultimately no need for a female love interest as their relationship can be used to fill that void. I must say that I expected a lot more from Noomi Rapace’s character. It seems they were just piggyback riding her overseas success in Sweden’s version of THE GIRL WITH THE DRAGON TATTOO, which is such a waste for someone with her talent. The villain, Professor Moriarty played perfectly by Jared Harris, was also a highlight of the film.

I must also add that it’s quite sad when Dr. Watson is the more interesting character of the two leads. Not to take away from Downey’s acting, but I was more interested and invested in Dr. Watson.

In the end, A GAME OF SHADOWS ultimately fails to deliver the thrills of the first SHERLOCK HOLMES, but it does offer its fair share of entertainment.

Posted on December 27, 2011, in Reel Reviews. Bookmark the permalink. Leave a comment.